The long road to Voyageurs

August 07, 2019
We didn't rush to leave Indiana Dunes the next morning, since it was out first time breaking down camp. Mike & I wanted to make sure we didn't forget to do any little step since we knew we had a long road ahead of us. We were hoping to reach Duluth, MN or thereabouts by nightfall.

The drive was smooth, but long, making our way northwest through Wisconsin.  The state is very green with rolling pastures and lots of farms & silos. At one point we counted 20+ silos groupings, like the one below, out in the distance in just one section. 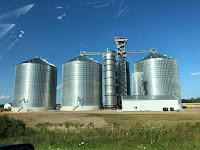 Now if you asked me a couple weeks prior to what states, or lakes, bordered Wisconsin I would have laughed and said, "No clue!". Now I'm a pro 😜, with mental images of the landscape and all. By the end of this trip, I shouldn't ever have to ask Geography Master Mike another question about US geography again. 😉🤞

Around 5:30pm we stopped in Rice Lake, WI for dinner.  I suggested a cute little down-home cooking place called Norske Nook.  Mike looked to his left and saw Adventurers Pub and Grill. I'm sure you can guess why he would prefer that place. 🍺 Since he had driven all day long, I figured he should choose. The restaurant was definitely fitting in with the lake life, mountain feel.  It had a tall ceiling with large wood beams and a giant canoe hung high over our heads.  Mike’s favorite part were the local beers on tap that filled from the bottom up.  The video below explains it perfectly.
As they say, when in Rome do as the Romans do...so in Wisconsin, we had to have cheese curds. They were served fried with a sweet chili dipping sauce and they were delicious! They didn't have the signature squeak that Erin in Fancy Gap said they should, but maybe because they were fried. 🤷‍♀️ 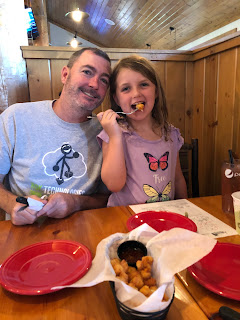 She also suggested Brats when in WI as that is another food they are known for, so I chose the Brat burger. It's a new take on an old Wisconsin classic and another Curious Family, The Curious Cuisiniere have given a little back story along with an easy recipe if you want to try it yourself.
➡️ Brat Burger Recipe. 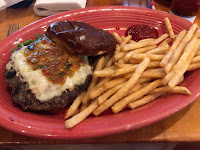 It had caramelized onions, sauerkraut, hot pepper relish, and swiss cheese on a pretzel bun. It was amazing and filling as I could only eat half.

We hit the road about an hour later and decided to try and make it to Duluth. That was the last big city, and known Wal-Mart, before we head into the remote North Woods of MN. We made it there shortly after 9:00 pm and were bummed it was after dark.  We all wanted to see the harbor, which looked massive with huge shipping container cranes at work, but also to catch a glimpse of Lake Superior. If we weren't on a time frame to get to Voyageurs, I would have loved to have explored Lake Superiors MN or WI coast a bit better. Both coasts were dotted with tons of state parks.

We checked in with Wal-Mart to ask the best place to park and they were by far the friendliest and cleanest Wal-Mart we'd come across. They said any where along the fence on the outskirts of the lot would be good so we chose a spot as far from the highway as we could. Around 3am both Mike and I woke to the trailer shaking from the wind and the sound of a storm approaching.  Sure enough, after checking the weather app we saw a big one coming right for us.
It started sprinkling and Mike headed outside to assess our situation. He suggested we move the trailer closer to the highway and parallel to the wind instead of perpendicular which felt like it was going to blow us over. A genius idea that had not crossed my mind. With the girls still sleeping in their beds we removed the wheel chocks and repositioned ourselves a few hundred feet away.  We got it all set up, choosing also to put the jacks down on the trailer for more stability and headed to bed.  It was hard to sleep, though, with the impending storm approaching. All the fears and worries I'd had for the last few months leading up to this trip felt much more real knowing that something as simple as a heavy thunderstorm could take us out.  My senses were on high alert for about an hour until I finally succumbed to sleep.

We both woke early the next morning, not having had much sleep and decided to grab a few supplies at Wal-Mart before heading out. I suspect Wal-Mart will be getting a lot of our business over the next year. Ha! 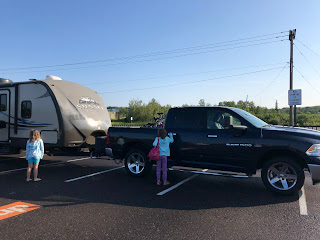 The drive from Duluth to Ranier, MN was quiet, remote, and gorgeous. It was a million different shades of green as far as the eye could see from the trees to the grass, to the bushes, and the cattails lining the sides of the roads. On one particularly long stretch, I saw what I thought were mountains, although I knew there were none ahead. Mike assured me they were clouds, but they had the coolest formation in the sky. Take a look at that white peak popping up. ➡️➡️➡️

The drive was overcast but just as we were coming into International Falls, the border town right next to Ranier, the clouds parted and the bright beautiful sun burst through.

We pulled into our spot at The Lakeview Cabins & RV on Rainey Lake and got settled in, excited to have full hookups (that's water, electricity, and sewer capabilities in RV lingo). The owner, Joanne, she's been running the property for 30 years now, called us over to check-in. She went over payment and explained that the whole property was free for roaming. She said anything with a white building, which included 3 separate docks, which we headed straight for. Walking down to the water felt so much like Maine to me. The cool, strong breeze, the smell of the grass, even the giant granite rocks covered in lichen reminded me of Maine. It felt like home.

I pointed out that the green on the other side, less than a mile away, was Canada. Delia was blown away! She thought it was so cool to see another country from where we stood. 😌 We spent quite a bit of time just playing and exploring before heading back to the trailer to finish setting up. 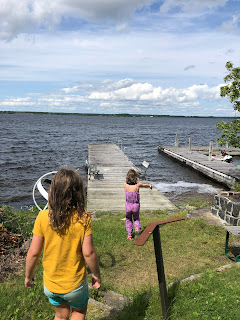 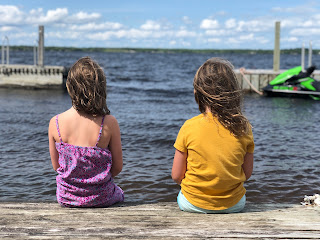 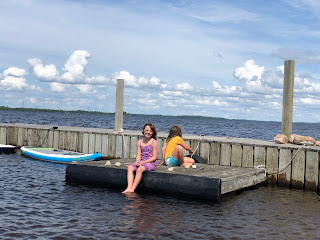 We found Mike on his laptop trying to get caught up on work he missed from having to take 3 days off for getting us here. He asked where the showers were, knowing it had been a couple days since our last, but mostly because we hadn't been able to fix our hot water heater yet. I headed back over to the office to ask Joanne, who informed me that they didn't offer any. That anyone camping must be self-contained (I'm guessing that meant to have their own bathroom & shower facilities) and that she'd mentioned that when I booked. Which is probably true and I'd just forgotten. I'm sure I assumed that we'd have our hot water heated fixed by then. LOL!
She also informed me that the city beach about a half-mile down had hot showers. We'd already paid her so there was no turning back now. Plus the only other campground in the area was smack dab in the middle of International Falls, not on the water like Lakeview was, and next to a paper mill. 🤢
I told Mike that even despite the lack of hot showers we made the right call on campgrounds. This one was a little slice of heaven.
Mike said he'd finish up work around 4pm central and that we could head to the city beach to swim...& shower. ☺️😄
Location: Duluth, MN, USA 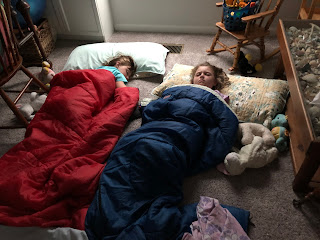 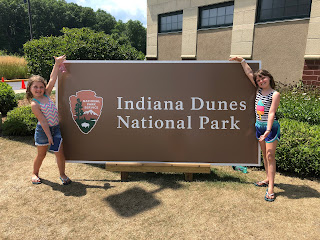 Despite our short setback in Virginia we still made it to our original destination for the night, Xenia, Ohio. Granted we drove until 11 PM, but that particular Walmart was the most welcoming per our app AllStays (user feedback in the app tells where the quietest, safest, and most welcoming Walmart lots around the country are located).  Xenia also gave us the shortest drive next morning to the park. I wasn’t super thrilled to be staying at a Walmart outside Dayton, OH though as both a Walmart in Texas and a nightclub in Dayton were the scene of two mass shootings resulting in 30 dead just the day before. While the two are unrelated it still felt very eerie.  We set out early the next morning and hit the road by 6:15 AM to beat the Dayton morning rush. We were successful and made it to the Dunewoods Campgrounds at Indiana Dunes National Park in Beverly Shores at noon, exactly as planned! 🙌 Our first trip with the trailer fully packed and stocked was most certainly a lear
Read more